Severe acute respiratory syndrome coronavirus 2 (SARS-CoV-2) causes coronavirus disease (COVID-19) which was first reported in Wuhan, China in December 2019 [1]. Currently, the United States has become one of the most impacted regions with confirmed cases totaling more than 5.6 million and with more than 175,000 deaths [2]. The severity of SARS-CoV-2 in high-risk populations in addition to the virus’ rate of transmissibility have all contributed to pandemic levels that continue to challenge the health care system [3]. Infections present with a wide range of symptoms; from asymptomatic with no or minimal symptoms to severe cases that may lead to pneumonia and death [4]. In order to develop diagnostics, therapeutics, and vaccines against SARS-CoV-2, a better understanding of the immunogenicity and pathobiology of SARS-CoV-2 infections is needed.

Antibodies in SARs-CoV-2 and COVID-19 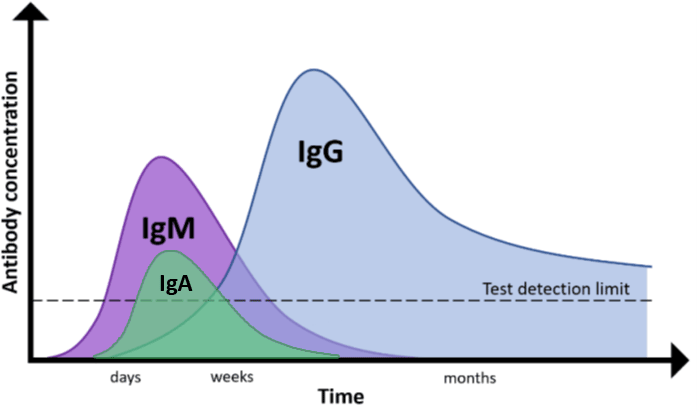 In viral infections, the first line of defense is immunoglobulin M (IgM) followed by the generation of the adaptive, high-affinity IgG response which is responsible for long term immunity and immunological memory [5, 6]. The first line of defense in respiratory viral infections is IgA which is present in the serum and the mucosal tissues, including the upper respiratory tract. For patient diagnosis, current research has indicated that IgM and IgG detection results in a higher sensitivity for SARs-CoV-2 detection than either isotype alone [4]. IgA detection in serum has also been demonstrated to be a sensitive marker of infection that may correlate with disease severity and neutralizing activity but more research is needed [3, 7, 8]. One study noted that 92.7% of the subjects tested positive for anti-SARS-CoV-2 nuclear capsid IgA, while only 85.4% had IgM and only 77.9% tested positive for IgG [9].

Role of IgA in immunity

In humans, IgA is the most abundant immunoglobulin in mucosal tissue with approximately 50% of IgA airway secretions present in the secretory form. In circulation, IgA is the second most abundant protein, with approximately 90% of IgA existing in its monomeric form [10]. Typically, secretory IgA is produced first followed by systemic antibodies occurring later in the immune response [11]. IgA in the mucosal tissue is synthesized locally, can translocate across the epithelial tissue, and can neutralize viruses intracellularly [12]. Similar to other respiratory viruses, SARS-CoV-2 likely produces protective secretory IgA in asymptomatic or mild infections [13, 14]. Downstream effects of IgA are mediated by IgA interaction with specific FC receptors on cell surfaces. In humans, there are five types of FC receptors with the FcαRI (CD89) receptor being the most important [15]. FCαRI receptors are expressed on a variety of myeloid cells including monocytes, neutrophils, eosinophils, macrophages, monocyte-derived dendritic cells, and Kupffer cells which up-regulate a variety of cytokines [12]. In addition to cytokine release, FcαRI also mediates other immunological defenses in immune cells including degranulation, respiratory burst, and phagocytosis [12]. The FcαRI receptor binds serum and secretory IgA, both monomeric and polymeric forms, and IgA subclasses 1 and 2 forms [16, 17]. However, only serum IgA triggers phagocytosis and respiratory burst in polymorphonuclear leukocytes (PMNs) [12]. However, the role of serum IgA is still not fully understood.

Due to its ability to interact with the immune system, IgA might be unfavorable to human immunity in certain diseases. Aggregation of IgA induces activation of mesangial cells which may be involved in initiation of the pathology of IgA nephropathy [18]. Nephropathy or acute kidney injury has also been an outcome of COVID-19 where approximately 3 to 9% of patients have had the condition [19]. Currently, there is some evidence to suggest that the enhanced IgA responses observed in severe COVID-19 cases may indicate that COVID-19 is IgA-mediated. This could explain common COVID-19 organ injuries including acute pulmonary embolism, kidney injury, and others [20, 21].

For standard diagnosis assays, virus nucleic acid real time polymerase chain reaction assays (RT-PCR) in combination with CT imaging, and some hematology parameters are the most typical approaches for clinical diagnosis. However, there are challenges with detecting viral genetic material in SARS-CoV-2 patients [22, 23]. After symptom onset, variability in viral loads along with the brief window of time for RT-PCR detection can lead to false-negative results [12]. Due to these limitations, there has been a growing interest in antibody assays including enzyme-linked immunosorbent assays (ELISAs), to accurately diagnose SARS-CoV-2 [3]. Serological assays support a number of highly relevant applications and allow the immune responses to COVID-19 to be studied, enabling the researcher to identify seroconversion, which will ultimately be important for vaccine development [24, 25].

Based on the potential role of IgA in the SARS-CoV-2 immune response, IgA-based serology tests targeting the SARS-CoV-2 specific Spike protein and nucleocapsid protein (NP) may represent an important diagnostic and therapeutic approach [7, 25]. RayBiotech has two indirect ELISA kits available for IgA detection in human blood, serum, or in dried blood for use to enhance IgA SARS-CoV-2 research in the laboratory. One indirect ELISA detects IgA formed to bind the nucleocapsid protein (N-protein) which is both abundant and very conserved in coronaviruses [26]. The other ELISA detects human IgA antibody formed against S-Protein S1 receptor binding protein domain (RBD). The spike protein, or S protein, is a common target for neutralizing antibodies and consists of two subunits – S1 and S2 [27]. S1 contains an RBD which is responsible for recognizing and binding with the cell surface receptor [27].