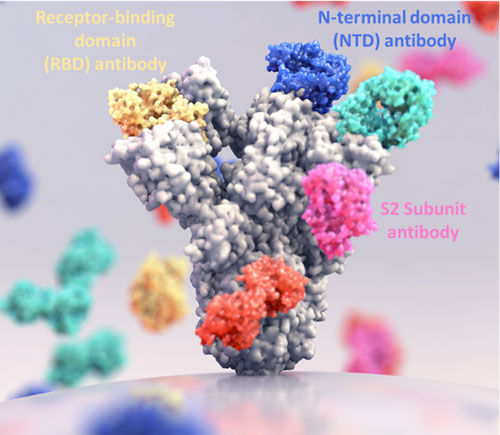 Since the emergence of SARS-CoV-2, the causative agent of COVID-19, many researchers continue to focus their efforts on the discovery of potent neutralizing antibodies that would prove useful in the design of COVID-19 countermeasures such as vaccines and therapeutics. To date, most vaccines or therapeutics in clinical trials or approved for emergency use authorization by the FDA target the receptor-binding domain (RBD) portion of the spike (S) protein of SARS-CoV-2 — and with good reason. The S protein exists as a trimer on the surface of SARS-CoV-2 and facilitates the entry of the virus into cells. The RBD is the portion of the spike protein situated in the S1 region that directly attaches to human cells through binding to angiotensin-converting enzyme 2 (ACE2) [1-4]. In fact, the RBD of SARS-CoV-2 binds more tightly to ACE2 than the homologous SARS-CoV-1 RBD [5]. The higher affinity results from small sequence changes and this has been proposed to underlie the higher transmissibility of SARS-CoV-2 [6]. As a result, neutralizing antibodies specifically targeting the RBD was an exceptional place to begin research to find protective antibodies against SARS-CoV-2. However, recently published studies suggest that an effective neutralizing immune response targets a much wider area of the virus’ spike protein than previously known [7-10]. Discovering these could prove useful for designing COVID-19 vaccine booster shots, cocktail antibody therapeutics, or future pan-coronavirus vaccines tailored to combat emerging SARS-CoV-2 variants of concern.

While RBD is universally recognized as the primary site targeted by neutralizing antibodies, RBD is structurally linked to the N-terminal domain (NTD) of the adjacent spike protomer, and evidence points to antibodies directed against NTD neutralize SARS-CoV-2 infection [10]. ACE2 plays a role as an entry receptor for SARS-CoV-2 via RBD but non-ACE2- expressing cells have been found to contain SARS-CoV-2 RNA, pointing to evidence of other cell entry mechanisms at play as well as the mechanism by which the virus successfully spreads to other organs such as the kidneys, liver, and blood vessels in severely infected patients.

Through cDNA library screening, researchers found that L-SIGN and DC-SIGN, C-type lectin receptors widely distributed in respiratory mucosa and lung tissue, are the major molecules that interact with SARS-CoV-2 outside of the ACE2-RBD interaction [11]. Notably, cells stained for L-SIGN and DC-SIGN also contained the viral spike protein NTD, while no cell contained the viral spike protein RBD. [cite] L-SIGN and DC-SIGN are ligands of intercellular adhesion molecule 3 (ICAM-3), via a sugar chain. The sugar called mannan is a ligand for both these receptors, and research performed in its presence suppresses SARS-CoV-2 NTD binding to either of the above receptors. This interaction between the spike NTD of SARS-CoV-2 appears to be unique among human coronaviruses, as indicated by the failure of SARS-CoV-1 NTD, or of OC43 and HKU1, to do the same [11]. Further study in cell culture showed anti-NTD antibodies were able to block infection by SARS-CoV-2 pseudovirus on SIGN-bearing cells. These anti-NTD antibodies also prevented a lethal mouse-adapted version of SARS-CoV-2 from infecting mice [7]. This shows the ability of serum NTD antibodies to neutralize the virus infection and indicating that these receptors play a role in successful infection.

Further confirmation comes from a new study performed at The University of Texas at Austin with patients who have fully recovered from COVID-19: most neutralizing antibodies produced during infection- about 80 percent- targeted other portions of the spike protein than the RBD with 40 percent being directed towards the NTD of the S protein [7].

These findings are particularly noteworthy because NTD is one part of the viral spike protein that has mutated frequently along with the RBD, especially in several emerging variants of concern, including the B.1.1.7 “U.K. variant” and the P.1 “Brazil variant.” One reason these variants are so effective at evading our immune system is that they have mutated around the human anti-NTD antibodies that had been most successful in combating the original coronavirus variant.

For an in-depth review of SARS-CoV-2 variants of concern, please read our blog “SARS-CoV-2 Variants: An Emerging Landscape of Therapeutic Targets.”

Also noteworthy, 38 percent of circulating antibodies target another portion of the S protein called the S2 subunit. The S2 subunit functions in mediating the fusion between viral and host membranes and has been found to have a high amino acid sequence identity of about 90 percent with other coronaviruses, making cross-reactive neutralizing antibodies against S2 more likely to preexist in populations due to previous exposures to other human coronaviruses [12]. Additionally, because the S2 subunit is more structurally conserved, it does not accommodate many mutations, as there are multiple regions within S2 that are required for fusion and infection [13]. This finding is especially encouraging as the S2 subunit could make an ideal target to include in a possible pan-coronavirus vaccine since this portion is widely conserved in SARS-CoV-2 and could protect against most or all variants of concern.

Taken together, these findings show there is still much to learn about our individual immune systems and how best to neutralize SARS-CoV-2. These findings will also prove useful for designing COVID-19 vaccine booster shots or future pan-coronavirus vaccines tailored to combat SARS-CoV-2 variants of concern. In support of these efforts, Raybiotech’s range of COVID-19 binding assays enable rapid, high throughput, and in vitro screening of potential inhibitors of various spike-receptor complexes that facilitate SARS-CoV-2 viral entry. RayBiotech also offers Spike variant-specific kits that include B.1.1.7 (including the N501Y and D614G mutations), B.1.351 (including K417N, E484K, and N501Y mutations), and P.1 (including K417T, E484K, and N501Y mutations) variants. Binding assays for the individual Spike protein mutations N501Y (useful for B.1.1.7, B.1.351, and P.1), E484K alone (in P.1 and B.1.351 but only in some B.1.1.7 strains), and D614G (useful for B.1.1.7, B.1.351, and P.1), are also available. More information about Spike-targeted binding assays can be found here.

Cannot find the COVID-19 recombinant protein you need to perform binding assays? Please contact our Technical Support team to discuss your project and create a custom quote. Our expert team of scientists is here to help you achieve your research goals.