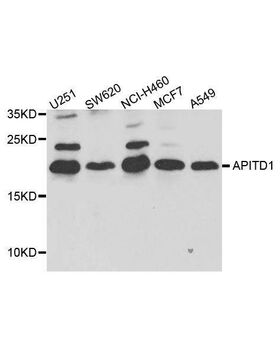 This gene was identified in the neuroblastoma tumor suppressor candidate region on chromosome 1p36. It contains a TFIID-31 domain, similar to that found in TATA box-binding protein-associated factor, TAF(II)31, which is required for p53-mediated transcription activation. This gene was expressed at very low levels in neuroblastoma tumors, and was shown to reduce cell growth in neuroblastoma cells, suggesting that it may have a role in a cell death pathway. The protein is a component of multiple complexes, including the Fanconi anemia (FA) core complex, the APITD1/CENPS complex, and the CENPA-CAD (nucleosome distal) complex. Known functions include an involvement with chromatin associations of the FA core complex, and a role in the stable assembly of the outer kinetochore. Alternative splicing of this gene results in multiple transcript variants. Naturally occurring read-through transcripts also exist between this gene and the downstream cortistatin (CORT) gene, as represented in GeneID:100526739. An APITD1-related pseudogene has been identified on chromosome 7.