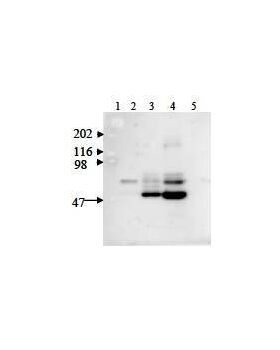 Visfatin also designated Pre-B cell-enhancing factor (PBEF) or Nicotinamide hosphoribosyltransferase (Nampt) , belongs to the NAPRTase family of proteins. Visfatin is an inflammatory cytokine that plays a requisite role in the delayed neutrophil apoptosis of sepsis. Visfatin exerted insulin-mimetic effects in cultured cells and lowered plasma glucose levels in mice. It was found that visfatin binds to and activates the insulin receptor, albeit in a different place than insulin. Furthermore, Visfatin may be involved in enhancing the effect of IL-7 and SCF on the formation of early B-lineage precursor colonies. More recently, several groups have reported the crystal structure of Nampt/PBEF/visfatin and they all show that this protein is a dimeric type II phosphoribosyltransferase enzyme involved in NAD biosynthesis pathway. Visfatin is a cytoplasmic protein with a molecular weight of 52 kDa composed of 473-amino acid. It has a hydrophobic N terminus, 2 N-glycosylation sites, several putative phosphorylation sites, and 6 cysteines. Visfatin is expressed primarily in bone marrow, muscle and liver tissue but can also be detected in placenta, lung, kidney and heart tissue.

The antibody is stable for at least 1 year from the date of receipt when stored at -20°C to -70°C. Reconstituted antibody can also be aliquotted and stored at 4°C for 1 month or at -20°C to -70°C in a manual defrost freezer for many months without detectable loss activity. Please avoid freeze-thaw cycles.

The rabbit anti-human Visfatin antibody detects specifically target derived from human recombinant protein as well as cell lysates of MD231 and Hela at various concentrations. Cross reactivity with mouse and rat are expected from sequence similarity.